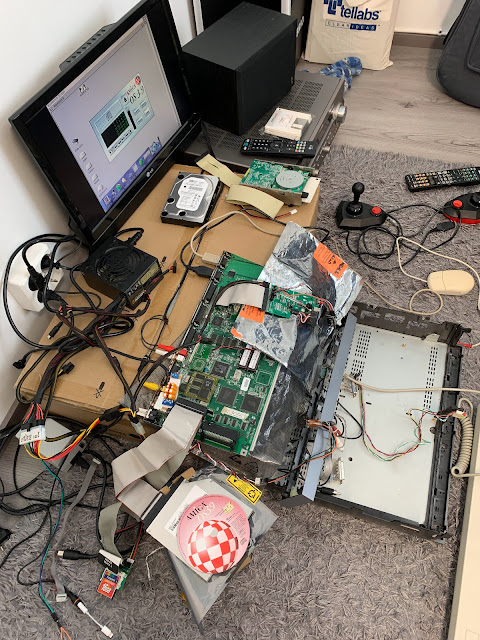 Unstable setup While designing and printing the parts for the case I also did some hardware testing to see that everything works as expected. First I upgraded the Blizzard's SIMM memory module from 16MB to 64MB and after testing it to be working I played a bit, at that moment, just released Tiny Bobble game. For some reason the game would always freeze in early phases when the turbo card was connected. Also I couldn't get the Workbench to load from the HDD. I didn't really have time at that moment to debug what caused those issues so I though that maybe the game just doesn't run properly yet with 68030 and my Workbench install in the old HDD was failing. I was going to make a new installation to CF card so I didn't want to start to check how to fix that. However later when I was testing things again I run to more stability issues. I had made an WB 3.1.4 installation to CF card with WinUAE/FS-UAE and tested that with the Amiga. I got constant lockups and many times t
Post a Comment
Read more My original plan was still to use aluminium sheets for creating new front and back panels to the same old VCR case. However, I got familiar to 3D printing at my job and when the Prusa launched Prusa Mini 3D printer I decided that I will get one for my other hobbies. While waiting few months in the order queue for the printer I also started to think that maybe I could use the printer also in the Amiga project. So I started to learn 3D modeling with Fusion 360. It has free plan for personal use and it seemed to be enough for this project. I started the modeling with the front panel frame. Idea was to figure out where to place DVD-drive and floppy drive so I could cut the aluminium plates exactly to correct measurements. After some thinking I realized that it would be much easier to actually create both panels with 3D printing. Somehow I got so into 3D modeling that I ended modeling all the parts and many of them way too detailed :) But later it actually paid off as I could just check all
Post a Comment
Read more

Changing caps and updating the hardware 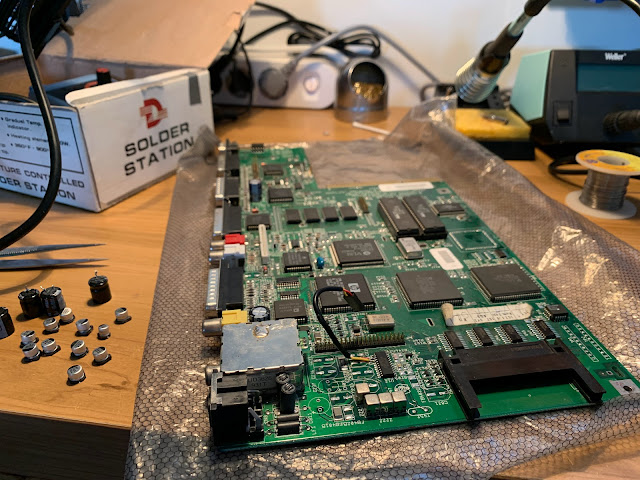 It took some time but finally in autumn 2020 I got time to change the caps for the Amiga. I had ordered a capacitor kit from amigastore.eu a year earlier and in addition to that I also got then newly released AmigaOS 3.1.4. I removed the old caps using two solder stations. I heated the capacitors' legs and my son took the caps out with tweezers. There was luckily no signs of any leakage so I could just clean the board with ipa and solder the new caps in place. After testing that the machine booted ok I also changed the roms to the 3.1.4.  I had started to think about upgrading my Amiga a bit more so I had also made couple new part orders, including EIDE'99, 68882 FPU for the Blizzard 1230-IV, laser upgrade for the mouse and new power connector from Amigastore.eu. In addition to those I got also SilverStone SST-ST30F 300W SFX PSU from Amazon and a Gotek drive from eBay. I wanted to make a new adapter to ATX->Amiga and used an ATX extension cable from eBay to build one. Once f
Post a Comment
Read more

Life went on and I didn't have much time for Amiga hobby and as I also didn't have too much space in the apartment(s) I decided to store my Amiga to my parents' house somewhere around 2011. That way it would be safe in warm room until I had more space again to put it back to action. Three years later we had bought a house for our family so now I had opportunity to take the Amiga back into business. So one day in september I visited my parents and went to the cupboard that the Amiga was in and found nothing. I looked around the house later for other possible places but couldn't find it anywhere. I asked my parents that where is it but they couldn't remember. Only explanation would be that my dad had taken it to electronics recycling at some point. I started to count in my mind that how much money it would take to get the same setup built again. I got pretty far until my parents called and told that my Amiga had been found. My dad had remembered giving some stuff to t
Post a Comment
Read more

History part 3 - From black to silver 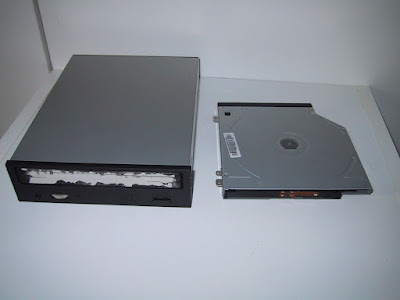 On the next summer after finishing the original project I thought that it was time to fix the problems that I had faced. I had also upgraded my av-receiver to new model and it was titan color instead of black so I thought that I could change the color on my Amiga also close to that. In addition of color I wanted to change the style of the front panel also to be closer match of that Yamaha av-receiver. I did some hardware changes also. I replaced the full sized CD-ROM drive with slim 24x TEAC CD-ROM. 3.5" hdd was replaced with 2.5" 4GB IBM Travelstar and ripped of AT power supply replaced with microATX power supply. New hardware had better specs but also smaller dimensions so I would have more space in the case. I took out also that external disk drive as I had some reading/writing issues with it and didn't really needed that. I was planning to put it into external case at some point. I had to buy couple of slim CD-ROM drives before I found one that was slave drive by defa
Post a Comment
Read more 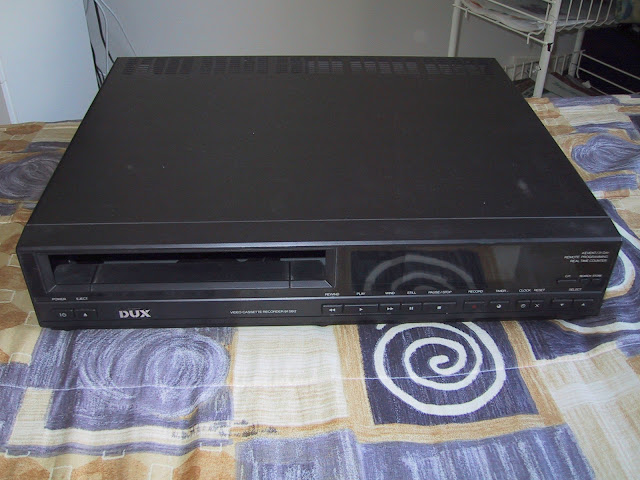 This post is translated version of my original article to finnish Amiga magazine SAKU from December 2002 which can be found from here:  http://www.amigazone.fi/saku/41/osastot/sekalaiset/eriamiga.html How it all started The idea to change the casing begin in summer 2000 when I bought my current Amiga. A1200 setup was built into small IBM tower casing which was functional but not so pretty to watch. I decided to start it slow by buying a fitting tower case when I could find one that wouldn't be too expensive. Time went by I hadn't seen a case that would be appropriate. In spring time 2002 I got another idea. A friend of mine told me how he had seen a project in internet where a PC was built into HiFi casing for home theater usage. In the next morning I took a meter and begin to study the possibilities. A1200 with Blizzard 1230-IV combination was about 41 centimeters long so they would fit in 42 cm wide casing. Other minimum measurements were 9 cm for height and about 35 cm deepn
Post a Comment
Read more 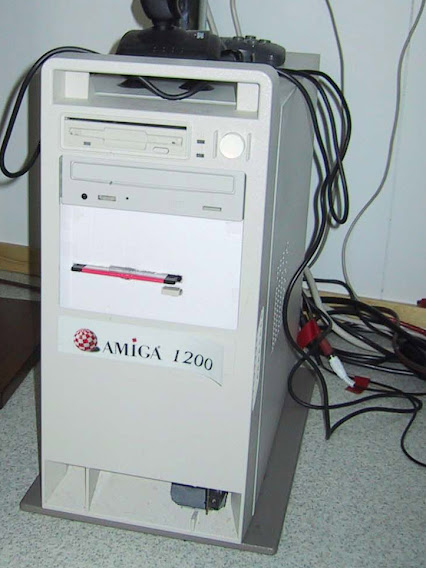 The project started in the spring 2000 when I bought my Amiga 1200. Previous owner had built it into IBM Aptiva 350 tower case which was functional but not so good looking. First task was to cover the two 5.25" disk bays with white cardboard as the case was missing the lid and add an Amiga sticker on top of IBM logo. Setup at that point was: A1200 motherboard rev 2B Blizzard 1230-IV/50MHz with 16MB RAM Quantum Fireball EL 5GB HDD Hitachi 4x CD-ROM drive CDR-7730 Extra disk drive DCE Internal Scan Magic DCE keyboard adapter Belinea 10 50 35 15" SVGA-display Soon I bought also NE2000 compatible PCMCIA network card and 90 degree PCMCIA adapter as I wanted to connect my Amiga to network. I was looking for a more stylish tower case that could host my Amiga, but as the budget wasn't too high me being a student at that point, I couldn't find a good case. So couple of years later when I heard about PC that was built into "HiFi" casing I got an idea that maybe that c
Post a Comment
Read more